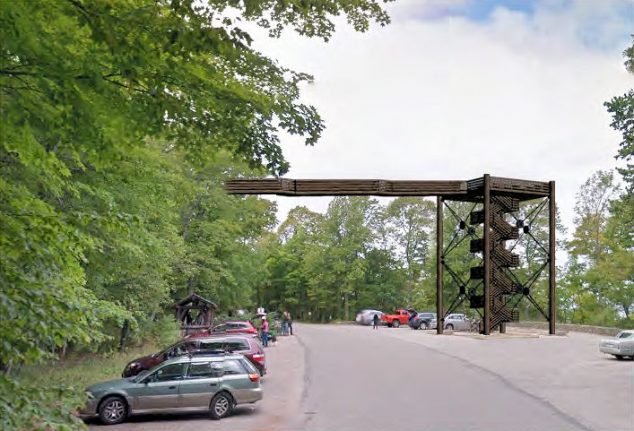 FISH CREEK, Wis. – Most people who commented on concepts for a new Eagle Tower at Peninsula State Park would like to see the tower rebuilt with an accessible ramp connecting the existing parking area and trails to the tower viewing deck through a tree canopy trail rather than from an elevator or internal switchback ramp. 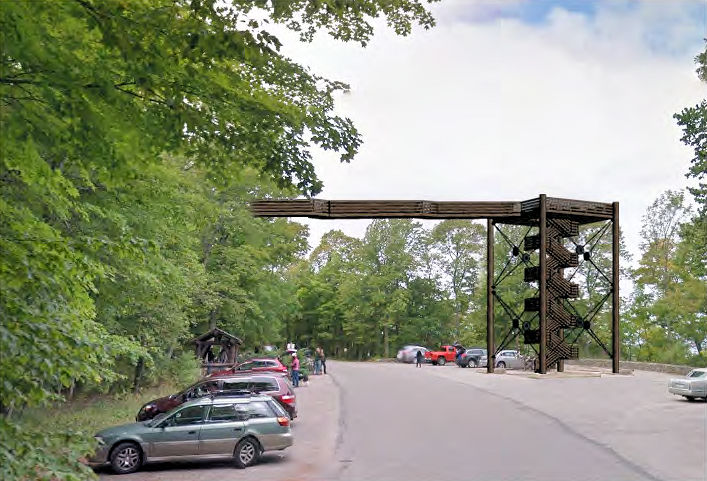 The concept of a new Eagle Tower will include an accessible ramp that reaches the viewing platform through the tree canopy
Photo Credit: Ayres Associates

While the 60-foot tower received the greatest support, there was also strong support for building the tower to 75 feet, which was the height of the old Eagle Tower. Of the respondents who preferred the internal accessible ramp design, many indicated that they would have preferred the canopy option had the proposed tower reached the 75 feet. Additionally, people also supported a future tower that most resembled the old Eagle Tower, preserves and memorializes the original Eagle Tower, and has low future maintenance costs.

The park closed the tower to public use in May 2015 to protect public safety after an inspection report raised significant concerns over its structural integrity and an inspection by the Forest Service Forest Products Laboratory staff found considerable deterioration of the structural and non-structural wood members. The tower was deconstructed in September 2016.

“Based on the comments provided by the public and stakeholder team, we plan on moving forward with the canopy concept while exploring the possibility of reaching 75 feet in height or as high as we can possibly make it up to that height,” said Ben Bergey, Wisconsin state park system director.

The public had an opportunity in September through early October to comment on the three proposed concept options via an online survey, mail and at a public meeting that was held on Sept. 28, in Sturgeon Bay.

The Friends of Peninsula State Park in cooperation with interested community members has formed a subcommittee, the Eagle Tower Fund Committee, which has raised more than $650,000 to help rebuild Eagle Tower and Gov. Scott Walker has included an additional $750,000 in the current state budget for rebuilding the tower.

Bergey said the next steps will be to select an architectural and engineering firm to develop the design based on the selected concept. Depending on fundraising, plan approval and bidding, Bergey said he hopes the new tower will be under construction in approximately a year.

People who are interested in donating to the reconstruction of Eagle Tower can find more information and a link to the donation website through the Friends of Peninsula State Park website at http://peninsulafriends.org.

People can also sign up to receive email updates on tower progress by searching the DNR website, dnr.wi.gov, for “Eagle Tower” and clicking on the “subscribe for Eagle Tower updates” email icon.