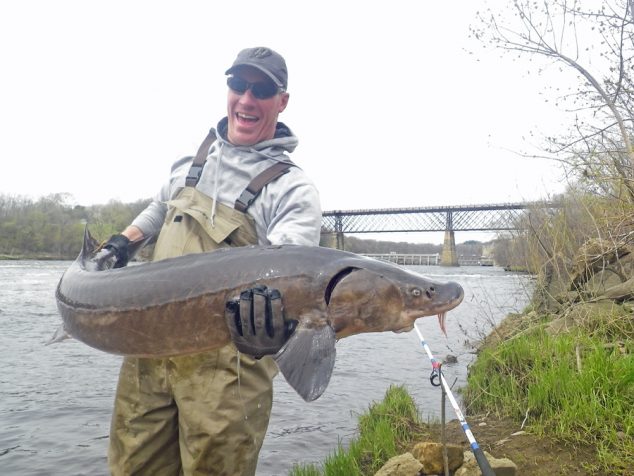 Opportunities to catch and release or harvest a big, hard-fighting fish

MADISON – Anglers interested in pursuing a big, hard-fighting fish will want to try their hand at fishing for lake sturgeon–armed with a stout rod and heavy line.

The hook and line season for lake sturgeon opens Sept. 2 and runs through Sept. 30 on several major river stretches for a fish that can grow to more than 6 feet long and exceed 150 pounds. The world record taken by hook and line was a 170-pound, 10-ounce lake sturgeon pulled from Yellow Lake in Burnett County in 1979. 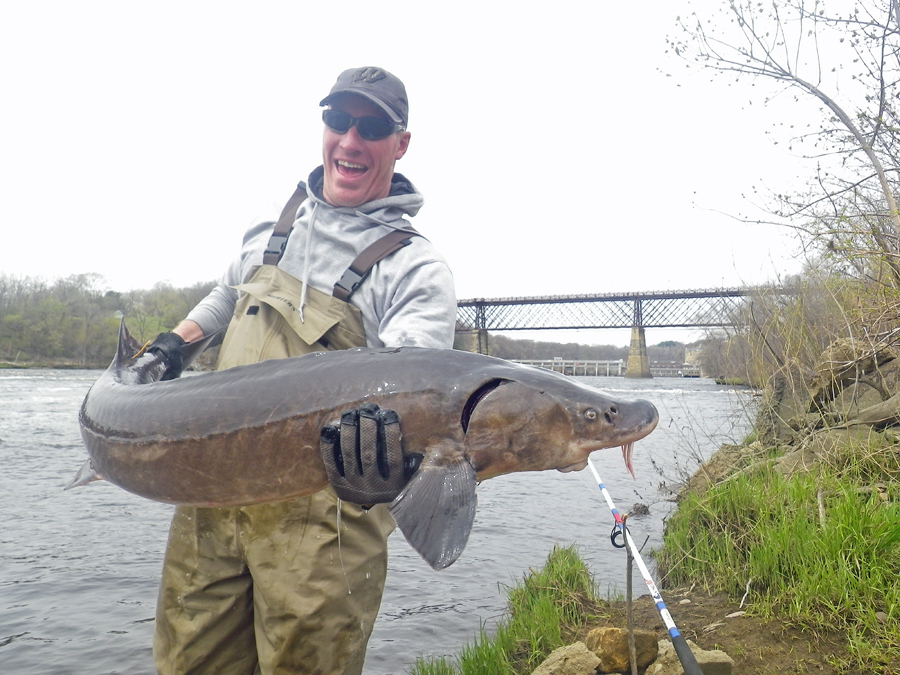 DNR Fisheries Technician Matt Simonson with a 47-pound sturgeon captured during a 2017 hook and line survey on the Chippewa River in Eau Claire. Fish captured during the survey ranged from 13 to 67 inches and weighed up to 56 pounds.
Photo Credit: DNR

While anglers can purchase a carcass tag to harvest one fish per season of 60-inches or greater, the growing catch and release opportunities for this fish are what’s exciting many anglers, says Lori Tate, a fisheries biologist and member of the Department of Natural Resources sturgeon team.

“There’s definitely still an interest in harvesting sturgeon in the state but we’re also seeing anglers enjoy catch and release opportunities for lake sturgeon,” Tate says. “Sturgeon fishing opportunities are improving as a result of the more protective length limit we implemented in 2007.”

“We’re very lucky–I don’t think there is any other place in North America where you can fish for lake sturgeon like anglers can in Wisconsin rivers.”

Harvest tag requirements and other hook and line season regulations

All anglers fishing for lake sturgeon must have a valid Wisconsin hook and line fishing license. Anglers need to purchase a harvest tag if they intend to keep a sturgeon. The harvest tag is available throughout the season and costs $20 for residents and $50 for nonresidents. Anglers who harvest a legal-size fish must immediately attach the harvest tag to the fish and take it to a registration station by 6 p.m. the next day for registration.

Find a list of harvest waters, harvest registration stations and instructions for properly tagging a harvested fish on the Lake Sturgeon Hook and Line Season page of the DNR website.

Tips for fishing for lake sturgeon using a rod and reel, including safe release

Ryan Koenigs, the fisheries biologist who chairs DNR’s sturgeon committee, offers these tips for anglers wanting to fish for lake sturgeon during the hook and line season.

Fishing forecasts for waters open for the season

DNR fish biologists have submitted summaries detailing some of the lake sturgeon populations that provide hook and line angling opportunities for this large and exciting fish. See their forecasts below and find others in the 2017 Wisconsin Fishing Report [PDF].

The Chippewa River is home to a healthy lake sturgeon population. In 2017, 196 lake sturgeon were captured by the DNR fisheries crew out of the Eau Claire office. The fish ranged from 13 to 67 inches and weighed up to 56 pounds, so there are trophy fish out there to be caught. Last year, eight sturgeon were harvested from the lower Chippewa River and anglers reported catching numerous sub-legal fish. Most anglers use night crawlers or cut bait and fish downstream of the dam or in deep holes of the river. Anglers should be prepared for a hard fighting fish, so a stout rod is needed along with heavy line and a large landing net. – Joseph Gerbyshak, fisheries biologist, Eau Claire, 715-839-2877

Lake Wisconsin, starting above the Prairie du Sac Dam and including the main lake and the Wisconsin River up to the Kilbourn Dam in Wisconsin Dells, holds a lake sturgeon population that is completely self-sustaining. The adult sturgeon population in the lake (those greater than 50 inches) currently sits at around 1,600 individuals, and has remained stable for many years. Although no fish have been harvested from this section of lake/river since 2012, anglers continue to catch and release many fish each hook and line season, with the upper end of the main lake and the segment of river just below the Kilbourn Dam in Wisconsin Dells being two popular places to fish. – Nathan Nye, fisheries biologist, Poynette, 608-635-8122

The Wisconsin River below the Prairie du Sac Dam remains a very popular place for sturgeon anglers to fish as well, and all of the sturgeon harvest from the Wisconsin River since 2012 has occurred below the Prairie du Sac Dam, with nearly all of the harvest occurring from the tailrace down to the Highway 12 Bridge at Sauk City. The tailwater adult population is generally between 150 and 200 fish in a given year, and since the 60-inch minimum length limit was instituted for the 2007 fishing season, harvest has averaged around eight fish per year. Typically more fish are harvested later in the season as adults move up from points further downriver and concentrate in the deeper areas immediately below the dam. – Nathan Nye, fisheries biologist, Poynette, 608-635-8122

DNR crews sampled 105 adult sturgeon that averaged 55.2 inches and 41.3 lbs in 2017. All fish were captured upstream of Yellow Lake in the Yellow River during their spawning migration. The largest fish this season was 72.8 inches and 106 lbs. Yellow Lake anglers traditionally do very well during the September hook/line season and are generally catch and release anglers with very few fish harvested. Harvest last season was four fish and the 2015 season had one fish registered. Overall, anglers can expect to see a good hook and line season with cooler water temperatures going into September. – Craig Roberts, fisheries biologist, Spooner, 715-635-4095 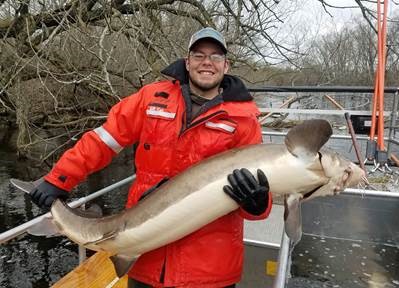 DNR has stocked 10 miles of the upper Menominee River from Sturgeon Falls Dam to Quiver Falls with lake sturgeon since 1982 and has documented a few legal size fish (60+ inches) in that section, including this 66-inch fish collected by DNR Fisheries Technician Derek Apps.
Photo Credit: DNR

The section of the Menominee river upstream from Grand Rapids Dam is open to hook and line with a 60-inch minimum size limit. DNR has stocked the 10 miles of upper Menominee River from Sturgeon Falls Dam to Quiver Falls since 1982. Crews just surveyed the river and caught a fish over 60 inches near the Sturgeon Falls dam. It’s the first fish in that size range that has been caught in that section of river. If the public wants to try a new section of the river they could explore that area.- Mike Donofrio, fisheries supervisor, Peshtigo, 715-582-5050

Veteran sturgeon anglers as well as newcomers to hook-and-line sturgeon fishing should find plenty of catch-and-release opportunity for sublegal-size fish in the Flambeau and Upper Chippewa rivers, along with an occasional chance to harvest one far exceeding the 60-inch minimum length limit. Of the eight sturgeon harvested from these river segments in the 2016 open season, two were 74 inches long. Popular shore fishing spots include the tailwaters of most hydroelectric dams and the deeper pools in the free-flowing river reaches, though some sturgeon anglers prefer to fish from boats in the impoundments. Some prefer cut bait or prepared stink baits, but many sturgeon anglers use a gob of night crawlers. Fishing is always prohibited in the fish refuges immediately downstream of the Turtle-Flambeau Dam and the Upper Park Falls Dam on the North Fork Flambeau River and below the Arpin Dam on the Chippewa River. – Jeff Scheirer, fisheries biologist, Park Falls, 715-762-1354