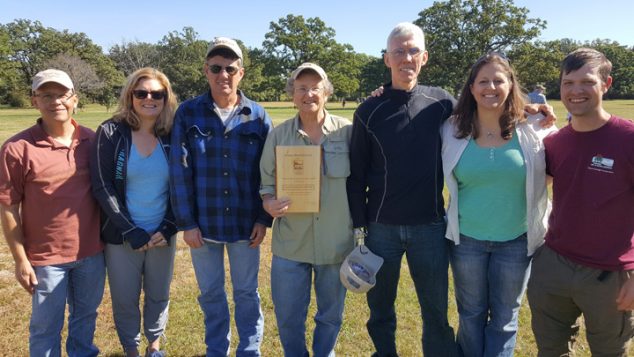 MADISON – The Chiwaukee Prairie Preservation Fund has long played an integral role in preserving the largest remaining prairie and wetland complex in southeastern Wisconsin, helping buy the first 15 acres of Chiwaukee Prairie in the 1960s to controlling garlic mustard and 24 other invasive plants there today.

Now that length and depth of service has won the citizen group the Volunteer Steward of the Year Award from the Department of Natural Resources State Natural Areas Program. Group members received the award Sept. 30 during a volunteer appreciation picnic at the Mukwonago River State Natural Area in Waukesha County. 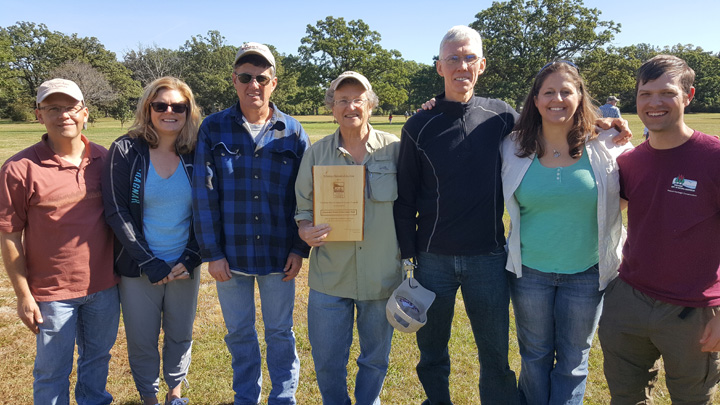 “Chiwaukee Prairie Preservation Fund and its leadership have been one of our cornerstones in protecting and conserving Chiwaukee Prairie for future generations,” says Jared Urban, who coordinates the State Natural Areas Volunteer Program for the DNR Natural Heritage Conservation Bureau.

“Their commitment has only strengthened over the years, and especially so in the last 5-10 years with their increased efforts to recruit more volunteers, to engage more with partners to leverage funding, and becoming active in acquiring land,” adds Sharon Fandel, the DNR Natural Heritage Conservation district ecologist who works with the group.

The Chiwaukee Prairie Preservation Fund has been working for more than 50 years on behalf of Chiwaukee Prairie, a one-time subdivision that in 2015 was named part of a wetland of international importance. That honor, and the preservation group’s role, is described in the Wisconsin Natural Resources magazine May 2016 story, “Ecological Treasures.”

Fifty-two years ago concerned local citizens like Al Krampert and Phil Sander mobilized when the subdivision started to be developed, and in 1965 joined forces with The Nature Conservancy to purchase the first 15 acres of land within Chiwaukee Prairie. Two years later, Chiwaukee would be designated by DNR as a State Natural Area and as a National Natural Landmark by the National Park Service.

The Chiwaukee Prairie Preservation Fund was officially incorporated in 1985. Now, the group holds monthly work days. Many of their volunteers are certified to apply herbicides, use chainsaws, and even assist on prescribed burns. Volunteers put in more than 1,000 hours of work in 2016, much of it removing or controlling invasive plants.

Key volunteers also work closely with NHC rare plant experts and Plants of Concern, a regional rare plant monitoring program of the Chicago Botanic Garden, to identify which species of rare plants need to be monitored and submit their data to the DNR Natural Heritage Conservation program.

More recently, starting in late 2016, the group has been working directly to acquire additional vacant parcels.

“CPPF stepped up to the plate and chose to pursue several vacant lots where we had interested landowners anxious to sell their land,” said Fandel. “They are truly our ‘eyes and ears’ at Chiwaukee Prairie when it comes to keeping us informed on various fronts, including new invasive species populations, road or trail issues, and partnering opportunities. They are among Chiwaukee Prairie’s strongest advocates and, as such, are very deserving winners of the Steward of the Year Award.”

Since its start in 2011, Wisconsin’s State Natural Areas Volunteer Program has grown to include 36 volunteer groups that devoted 5,820 hours in 2016 to 43 state natural areas. Learn more about the volunteer program and find a listing of upcoming volunteer workdays by searching the DNR website, dnr.wi.gov, for “SNA volunteer.”